It’s hard to believe how fast the time went here in Ecuador. It’s 5 a.m. and still pitch dark and cold outside, and we are already heading to the airport to catch our flight to Chiclayo/Peru with a 5 hour lay-over in Lima. By the time we reach Chiclayo it will be about 5 p.m. Although we had a relaxing day yesterday, no doubt we are all very tired, especially Brother Vin, who like always poured out everything and beyond.

We feel very blessed and are thankful to the Lord that He allowed us to be here at this time. The saints made us feel at home and even though most of them speak only Spanish, with the Holy Spirit among us we understood many times without words. After a weekend like this none of us can ever be the same and I believe that great things in the unseen realm have been achieved. The Word accomplishes always everything for what it has been sent.

When we arrive in Lima, we all have to go through immigration and pick up our suitcases, go through custom and check them in again at the LAN counter. Timmy, Gideon, Michael and Atri are staying back in the custom area, because they have to declare every single piece of equipment. The whole procedure takes about 2 hours.

While the rest of us get through quick and easy into the arrival area, a group of brothers with their Pastor Brother Marcos Espinoza from Lima is greeting us and invite us for lunch not too far from the airport. But because of the brothers are held so long in custom, the time for having lunch together is shrinking and shrinking – mind you, we are already on our feet since 4 a.m. and by now it’s after 12:30 p.m. 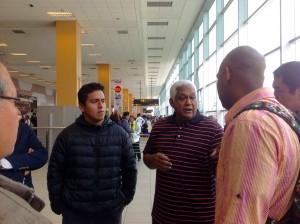 And no breakfast yet, just a little muffin in the plane.

Brother Vin actually starts to preach to the group of men until our brothers are released from custom. So here the brothers from Lima had already a 1 hour service right in the airport. 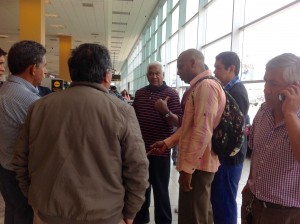 The brothers still decide to go for the lunch, and by now we have only 1.5 hours left until our flight to  is boarding. Except for Burkhard and me everybody takes off to the house of the pastor, which is truly not more than 15 minutes away. But it so happens that the brothers in whose van the two of us end up, cannot find their way. We are driving around and around until they finally find it. When we arrive everybody is already finished with lunch, and we have 10 minutes to eat, and then rush back to the airport. It’s too bad, the sisters must have worked for hours and hours to prepare this special lunch, and the Lord will bless them for their great sacrifice.

The traffic to the airport is not too bad and we make it just in time, but now we hear that the flight is delayed for another hour, and all the rushing was in vain. But it gives us some time now to sit back now and enjoy some of the delicious Peruvian chocolates and coffee.

Since we are up since 4 a.m. almost everybody is fading out after take-off. The flight is only about 1 hour.

In all that drama I forgot to mention that when we arrived at the airport here, a man approached me and tried to direct me to go into a certain office. I know better than that and just ignored him and made my way quick to another area, because I had to rebook some flights, while Burkhard was trying to get back into custom to assist the brothers. Then the man approached Susan, because obviously he had seen us together, and he started to question her about me. She pretended she didn’t know anything, and he was still looking and hanging around where he met me first. Because it took so long for the airline with their slow computer system to get our flights rebooked, by now Susan got a little concerned and while the man didn’t look she shot a quick photo with her phone, just in case I was kidnapped. So her mind was going by now a hundred miles per hour, but she was relieved when after about 45 minutes I finally showed up again. We had a good laugh, but still watched out for each other, even when going to the washroom. These kind of thoughts arise in a place like that, where they have so much crime. The airport was full with police today, but we learned later, that there was a soccer game going on. This world is really gone insane and as the song says, ‘No place to run and no place to hide; the only escape is the faith inside.’ This is becoming more real as the days go by.

Brother Selvyn had taken another flight this morning and he met up with us in Lima. He told us that they took him in the Panama airport alone in a place downstairs and searched him and his luggage. If the devil is not angry and tries to throw all kinds of sticks in our way. But I remember just now the that Brother Branham talks about the lovely fruit tree, and the people throw sticks to get some of the fruits. So it is.

Anyways, it is a very interesting travel day, and while I am writing this during our flight, the day is by far not finished yet, and who knows what else is going to happen. More later, as I am trying to close my eyes a little bit now as well……

Brother Ever together with some brothers from his church are waiting to pick us up, and everything goes quick and smooth, and we are driving to our different apartments, which are situated at the seaside of the Pacific ocean in Pimentel, 30 minutes away from the city. 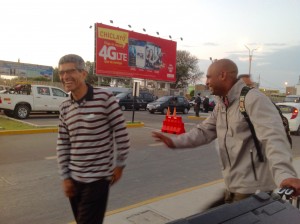 We all just drop our luggage off and leave for a bite to eat, and we realize that we have no food in the apartment for breakfast, as the brothers expressed to come over to our place for breakfast for the time here in Peru.. So, Susan and me are rushing to a grocery store close by and filling up a cart with food for the next couple mornings.

Coming back to our apartment its almost midnight and Susan and me start to clean the kitchen, which was obviously not used lately, wash the dishes and put away all the groceries. What a day it was, and as soon as we hit our pillows we are falling asleep.