The Lord of hosts is with us; the God of Jacob is our refuge. Selah. Psalm 46,11

When I think about this little place of Wola Piotrowa – which literally means “little village of Peter” with a population of 250 people, it’s in such a peaceful setting, laid back as we would say, and about 70 believers live here under the leadership of their humble shepherd Brother Pietro Sniegon, a time-tested memorial of God’s amazing grace.

The brothers meet at 11 this morning,

where the Presence of God comes down again in such a mighty way, giving Brother Vin the unction of the Holy Spirit to speak the things, which are needful in this hour. 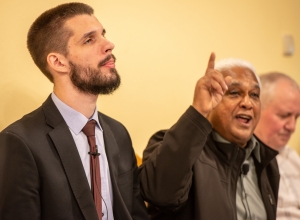 I have the privilege to spend the morning with Sister Anja Lupiezowiec, who lives all her life here in Wola Piotrowa, and we have met the first time 30 years ago in Germany. As we are sharing old memories and looking at photos, on many we recognize Brother Vin and Brother Steve Walters from the late 80s, standing in front of the little brick houses and gardens, and it just looks still the same today, because not much has changed here ever since.

The afternoon service starts at 4 p.m. and the believers are in great expectations, coming from so far to catch the meat in due season. 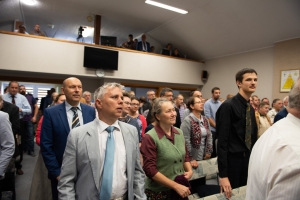 The musicians and singers create a wonderful atmosphere, so the Word can find a fertile bedding ground and bring forth for what It is sent for. 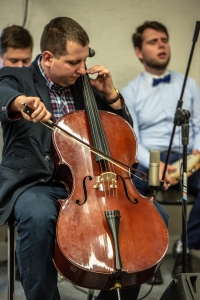 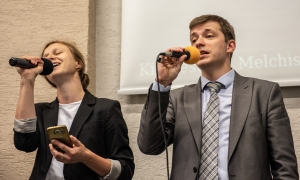 Brother Vin continues with the second part of the message from yesterday: The Responsibility Of Having Power And Operating Gifts, and he takes the Scripture from Exodus 17:1-7. And I just add the scripture here and the comments of God’s servant in bold, which give us the direction where the Spirit is going. 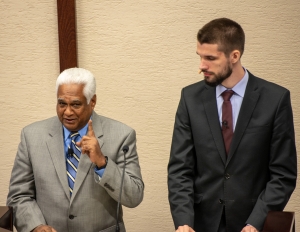 Exodus 17:1 And all the congregation of the children of Israel journeyed from the wilderness of Sin, after their journeys, according to the commandment of the Lord , and pitched in Rephidim: and there was no water for the people to drink. They journeyed according to the commandment of the Lord. They couldn’t move until God, the pillar of fire moved, and couldn’t camp until God specified the place where to camp. And where God caused them to camp, it had no water. God knew how much people it would have. You can go without food,  but not without water. But Moses took them to the place where there was no water, because they journeyed according to the commandment of the Lord. Think of it, the ways of the Lord are passed finding out. But all things work together for good for those who love God. It’s not about us, but about God. He designed you for a place in the Body. God forordained people for certain things.

[2] Wherefore the people did chide with Moses, and said, Give us water that we may drink. And Moses said unto them, Why chide ye with me? wherefore do ye tempt the Lord ? Watch how the people were unconsious of God’s ways. They were blaming Moses that they had no water, but Moses himself never went from Egypt to Canaan, and it was God who instructed him where to go. He didn’t even know the route. It was God passing them these places. But because God was in an invisble realm for them, and Moses was the earthly leader, they put pressure on Moses.

[3] And the people thirsted there for water; and the people murmured against Moses, and said, Wherefore is this that thou hast brought us up out of Egypt, to kill us and our children and our cattle with thirst? [4] And Moses cried unto the Lord , saying, What shall I do unto this people? they be almost ready to stone me. He didnt know himself where the water was, but he was content and knew, that it is impossible for God to lie and there is nothing to hard for the Lord, and He had respect for the Lord.

When God came down and delivered them and a circumstance came up, they didn’t have scriptural thinking. They we thinking about themselves, the children and the cattle and things were difficult. These are the exodus peoole, not the Egyptians, the elected called out people under the messenger, who is following the pillar of fire.

[5] And the Lord said unto Moses, Go on before the people, and take with thee of the elders of Israel; and thy rod, wherewith thou smotest the river, take in thine hand, and go.

In chapter 15 they were dancing and singing, in 14 they were crying when they saw the Egyptians coming. And here they didn’t look back and see and draw inspiration from the things that God did for them, to face the present circumstances.

[6] Behold, I will stand before thee there upon the rock in Horeb; and thou shalt smite the rock, and there shall come water out of it, that the people may drink. And Moses did so in the sight of the elders of Israel.

It was the judgment rod and all the elders were gathered and the judgement rod is about to struck the rock, and the waters came forth, waters that were going to save a perishing people.

[7] And he called the name of the place Massah, which means trial and Meribah, because of the chiding of the children of Israel, and because they tempted the Lord , saying, Is the Lord among us, or not?

They didnt look back and knew that God started the work and that He will finish it. God has never abandon what He started and He never changes His mind about His Word. 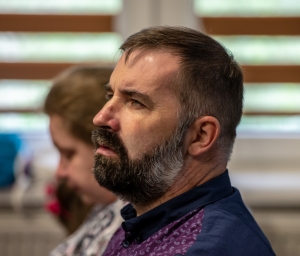 3 Let’s bow our heads. Our heavenly Father, we believe tonight that You’re still the same great Jehovah God that You seen the need of the people in the days of Moses. And how that in that day, to fulfill Your promise to the people that You made to Abraham, their father, You had Moses to come on the scene. A little boy borned in a home, that was a very odd birth, something peculiar taken place. They seen he was a proper child, and he was hid in the bulrushes. You guided him, nourished him, brought him up to the age of the time that’s about forty years old. Then he… The people misunderstood that he was to be their leader. They did not recognize the leader.

And today it—it’s likewise, Father. We can’t seem to realize that It’s the Holy Spirit is our Leader, come to us to lead us… [Blank spot on tape—Ed.]… appeared to him in a flame of fire, an Angel that went before him. That was the One that was upon the rod that smote the land, that opened the Red Sea, that hung over them like a Pillar of Fire, that guided them. And where the Fire went, they went. The Cloud by day and the Fire by night…

4 Father, today we believe that You’re with us. We know Thou art. You have Your… revealed Yourself in a way… in a mysterious way, telling us that You was with us, showing signs and wonders, and then have come down and permitted to the unbeliever a sign that cannot be lightly spoke of among their own people of scientists has proven that truly it’s the same Jehovah.

And we love You, Father, tonight, and we know that You’re with us. And we pray that Your Spirit will reveal tonight the great things of God, that all the audience might, with one accord… Now, we know that it’s not impossible to have a repeat of Pentecost tonight. We’re all here in one place. May we become in one accord, under one expectation: that is, that God will move into our midst and heal all the sick and the needy. Grant it, Lord. Bless us now in the farther part of these services, in the Name of Thy beloved Child, Jesus, we ask it. Amen.

32 One of these mornings, She’ll go up in the air to meet the Lord after She’s went through these hard tests. That’s right. Great picture, persecuted, laughed at. But God’s bringing Her out. She’s held right on.

You cried for deliverance. Sickness broke out among you; diseases, cancers, blindness. That’s the thing that’s been harming the Church. Then the Church begin to cry, “O God, send the restoration of the gifts.”

Oh, my. I hope you pardon this personal expression, but about a few years ago… I believe with all my heart, the same Pillar of Fire that came down in the burning bush, swept to this earth again. I believe It’s in our midst tonight.

If God could do that, and bring deliverance in the days gone by in the church natural, so will He in Church spiritual. And I believe tonight, that the same Pillar of Fire that led the children of Israel is here tonight leading the Church spiritual now, delivering them. You can only be di—delivered by faith.

34 Now, when He appeared back there first, He was a whirlwind in a bush to me when He appeared. And I come as Moses of old to tell you not to follow me, follow Christ. Believe Him, that He’s here—here to heal all the sick and the needy. Do you believe it? And I believe He’s here to heal those who have need of Him, save those, put those in harness of God (Do you believe that?), send them out to be soul-winners and to preach the Gospel. How marvelous He is. How good.

When God came down today, people were shut up in bondage of religion, but in the hour of restoration God came down and He began to do the same signs and wonders and when He got the attention of the people, then followed the Voice of the sign. The sign was only to get their attention.

To summarize this tremendous service, Brother Vin shows by the scripture that the first exodus is an exact pattern of the second and this third exodus, and he shows how God gave them tests and trials to show them what was in their heart and where they were standing. But many of them didn’t understand God’s ways and we see in the report of Numbers 20, when God brought them in the same situation, to see if they were able to master the circumstances, that they failed again. Watch their behaviour in the testing time; no faith or knowledge, no patience, no godliness, no respect for God’s servant. But they are not turning to the Arabs, Muslims or Hindus, but staying right in the Message, just going along, not understanding that their lives are preplanned and that the tests are to bring them closer to God, to love and trust Him in all circumstances.

People have to look inside of them, if they are the Word. 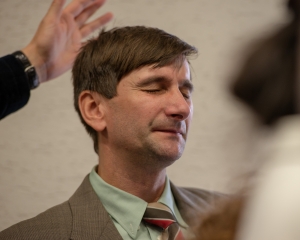 What a tremendous service again!

Lots of greetings and photos are taken after the service; everybody is so happy and encouraged after such a Feast in theWord. 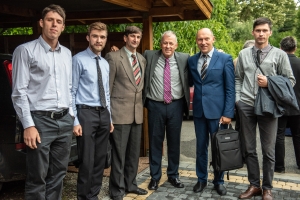 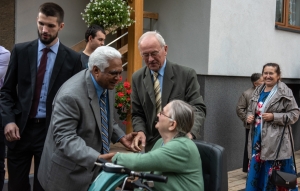 We have an early night, because tomorrow is the last service as early as 9:30 a.m.