As the chapter for this season in Bazanowice is closing, we cannot thank God enough for this little group of precious believers here, who are standing strong and faithful together with their shepherd Brother Jacek Walach in the midst of Jezebel’s system. It was a blessing to be here, but now the time has come where we need to continue our journey to Gliwice, where Pastor Robert Fiszer is the shepherd of a small group of believers. The Lord has needs to go to Gliwice today!

Time flies by in the morning, when we have to get our luggage packed and organized, and we are on the road again by 1 p.m. The route to Gliwice leads us through many small villages, it’s a fruitful area at this time of the year, where all the cherries, apricots, peaches and strawberries are ready to eat, and once in a while we stop to taste some of their harvest. At the same time holiday time for the Polish people here is starting just now and a lot more traffic is expected, which slows us down a bit. It’s pouring rain today, but by the grace of God we arrive safely around 3 p.m. in Gliwice, and are able to get some rest.

This little city is saturated with Catholicism, and the landmarks are three big cathedrals.

While strolling a bit through the centre of town this morning, we recognize lots of signs of this Jezebel system in a midst of an unconscious people. This sign means ‘You are our hope’, and it has the symbol of the sun god. 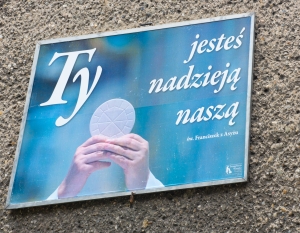 We cannot take the time today to visit the world’s tallest wooden structure with 387 feet, which is acting as a transmission tower, built in 1935. I just want to mention it here, because we are told that this is exactly the place where the second world war started. On August 31, 1939, the Germans staged a faked ‘Polish’ attack on the station, which was later used as a justification for the Invasion of Poland.

Pastor Robert Fiszer, a precious brother, whom Brother Vin knows for many years, has invited him to come and minister in his church. The service begins at 6 p.m. 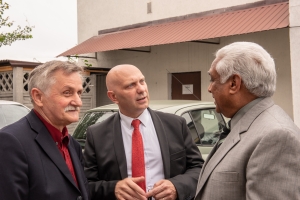 Many believers who attended the meetings in Bazanowiche and appreciate the ministry of God’s servant, are here in the service tonight and everybody is in great expectations. Not a single chair is left empty and we appreciate the privilege to be here in this little place. 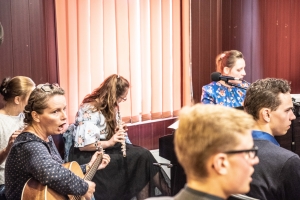 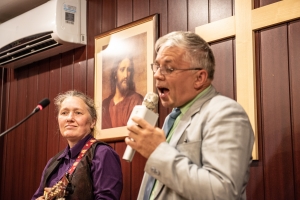 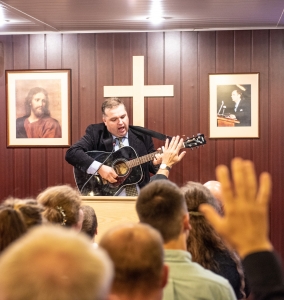 The title of tonight’s message is DEATH AND LIFE IS IN THE POWER OF THE TONGUE with the subject Out of the abundance of the heart the mouth speaketh and Brother Vin takes the scripture from Proverbs 4:23-24. 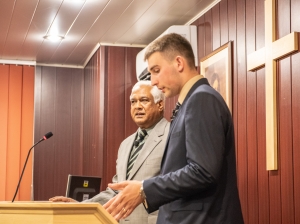 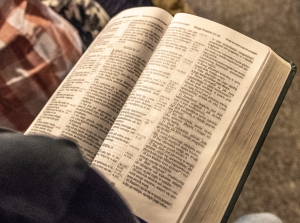 Brother Samuel Walach is interpreting, and I am just giving a short summary from this service.

Satan is a perverter and this is an hour, where the Message is perverted, one Message and thousand interpretations. A very froward  mouth, men with perverse lips, who speak lies, overthrowing the faith of the people, misplacing, and misinterpreting the Word. Any church found with false doctrine is no longer a virgin church. It’s a church committing adultery, because it’s receiving the seed of men and not of God.

Brother Vin lays out that the Spoken Word was given for multiplication. Satan perverted the Word and because of the fall we came by the sex birth. Jesus had to come and to die to make a way for us to come back to what Adam forfeited. The first person Jesus preached to was Nicodemus, a priest, a holy man and He told him, that he had to be born again. 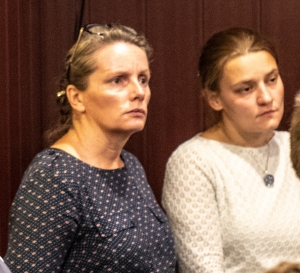 The church in this hour is Christ, and God has raised up men as the defence of the gospel and not to take the people into strange doctrines. As the serpent beguiled Eve with perverting the Word… therefore we must keep our hearts with all diligence with discernment of Spirit, because in every age the Spirit says “He that hath an ear, let him hear what the Spirit saith unto the churches.” 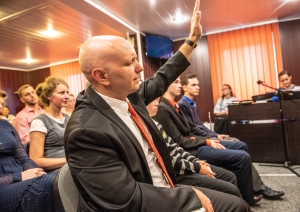 And in this junction of time, we as the Bride have to be put to the test. In the first age already, before the church could come to any real state, satan infiltrated the church and did so through seven church ages. 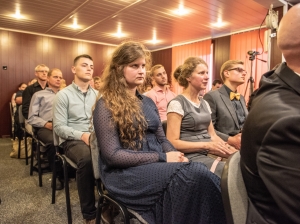 And while we are waiting, false anointed ones are at work. In this we know the time and season and we don’t think is strange, what is happening, because these things have been prophesied.

The wise man digs deep to find the rock, and because his house is build on the rock, when the storm comes, it stands unmovable. And God is fortifying His people.

The true church of the last day is predestinated to stand. Only the original Word and the original Seed shall stand, and God has trained men that have the Five Musts to do God a true service according to His will. 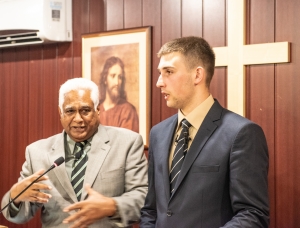 “Watch the Word, the season and see how Christ knows how to deal with every individual.”