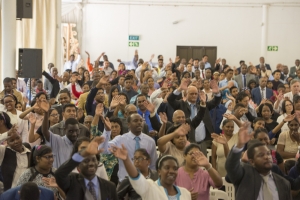 It’s a great resurrection morning today and the hall is filled to the last seat, in fact, there are not enough chairs – some people are standing in the back; but everybody comes with their lick of fire and the atmosphere is faith-loaded.

There are believers here from Zimbabwe, even special friends from Angola… who are interpreting the service into Portuguese! 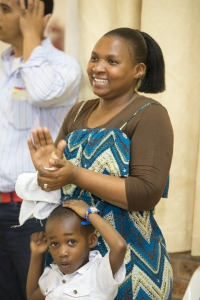 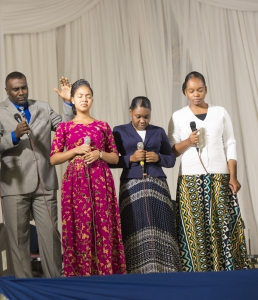 What a glorious day, where the Lord does some of His last touch-ups, so He can take us home. God truly lives in the praises of His people and we know, we are in His Presence. Rapturing Faith Is The Hunger Of Our Souls Today… This weekend, we just want to seize the opportunity… this is the hour, be aware! 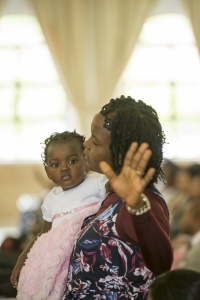 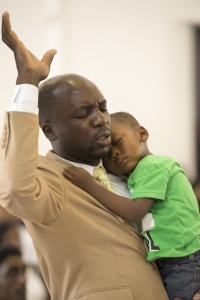 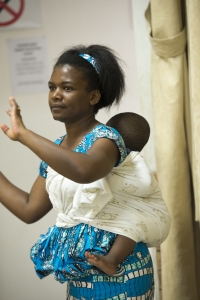 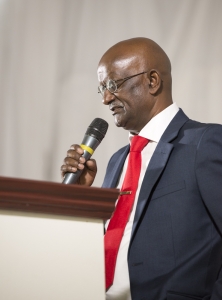 At the beginning of this year God can do something for us, that will align us with Him; He always has a reason and purpose. The stars in the heavens are set in their course, God has put them there to move by the power of His spoken Word; the sun, the earth, the moon, and all of these are just reflections of us. We are here because God ordained for us to be here at this time; the same way God has set things in nature in His divine order, they are just shadows and types of a man.

Brother Vin mentions, that he was so encouraged during the last two services, when he saw the believers listening so attentive; they were so responsive. Brother Vin asks the sisters to sing New things have been declared… 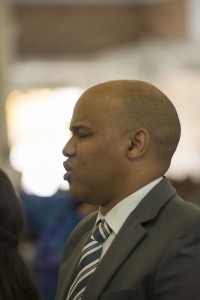 God took Brother Branham beyond the Curtain of Time, and when he went there, he saw celestial Bodies, those mansions that Jesus was talking about, a civilization that has been kept secret from this world. That’s what has come to us: hidden Truth that was sealed up in the Word.

The unchanging God with His unchanging ways is bringing a people into their inheritance, incorruptible, that fadeth not away, a House eternal in the Heavens. 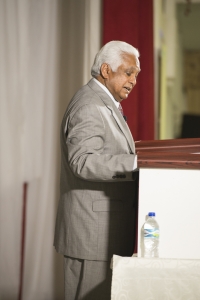 This again are very short excerpts from both services, and they are connected to the previous ones.


The Lord Himself descended to His prophet between the second and the third woe.

We are taken up in the realm of revelation and vision, we are in the Lord’s Day between His priesthood and His Kingship. The church age has passed, look where we are!

First, John saw a door open, he comes up, and he is seeing a Throne was set in Heaven, and ONE sat on the Throne…John had heard this Voice as it were of a trumpet. Later in chapter 4 everybody began to worship. They were worshiping the One on the Throne as Creator.

God showed John things to come, He showed him everything and the whole Book was open wide before John’s wondering eyes and we are being edified and purified by its Spirit, are made ready for His glorious appearing.

Revelation chapter 5 reveals Him as Redeemer; they were singing a new song. 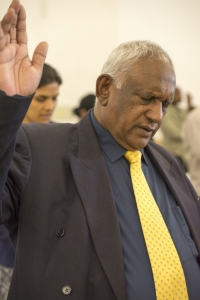 For years we were reading, developing concepts, and everybody is conceiving different, but this Word has to be operated and there have to be people on the earth, who are growing up into this to become the Word. You have to be one of God’s eternal attributes. The elect have two natures in one body; only Seed can be reborn, the old husband is dead. The shuck cannot go to garner, only the seed is going to the garner. 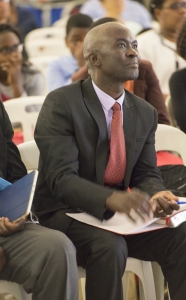 Your life is already written, and you can see the junction of your experience how he is bringing you from deciding all the way for such a time as this, when you are coming to the threshing floor.

You begin to see this great mystery of yourself. The bride at the end of the age is ascending to a higher order. It is far beyond this church or that church…

Before there is a Word there is a thought. In the Bible we don’t see nothing before the foundation of the world other than the Lamb slain and the names put in the Lamb’s Book of Life.

First He did His purchasing work, then as the great Highpriest He did His meditorial work, and it’s in the claiming work when the Book is going to be open. 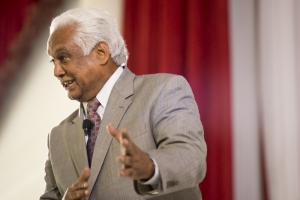 We have passed from death unto life, sin has no more dominion over us.

So many times in our relationship with God we are tested, and we know, He is proofing His Word by believers. Those that are led by the Spirit of God they are the sons of God. Leadership…

From Genesis to Revelation is one continuous revelation, expressed through the lives of believers, and when we come to the end, we see the bride, a glorious church. Christ is the mystery of God revealed, Christ is revealed in His own Word. Our names, our lives, our experiences are so personally identified, because our lives dove-tail the Scriptures, and cause us like Mary to ponder these things. When Heaven is open, hell is open, too. And so we try to sensitize the people, and show what is behind religion, economics, it’s lucifer who builds his kingdom to be enthroned as god, deceiving the world. But there are some that cannot be deceived, they are redeemed by the Lamb. They have the victory, and Paul said, And the God of peace shall bruise satan under your feet shortly. 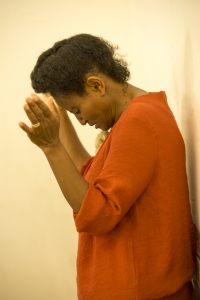 The service ends with the song: We’re on a journey, that started in the mind of God…the Word herself takes the Word Itself and reveals herself in Itself… 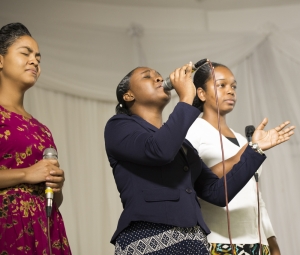 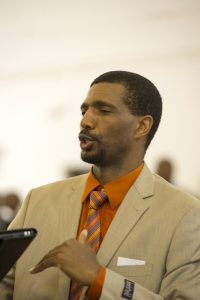 PARABLES OF THE SON OF MAN


Again it’s a wonderful atmosphere for the Word to come forth. This time Brother Vin is introduced by Pastor Daniel Naidoo. 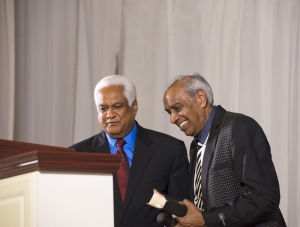 May in this last service the grace of God come down. Brother David Dayal blesses us with Leaving On My Mind… 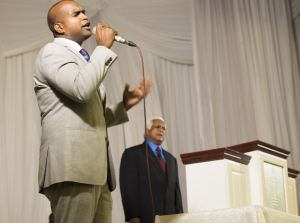 As it was in the days of Noah… and then He spoke in parables. There was a midnight cry… in Revelation 10, giving that prophecy, one will be on the earth at that time, that will catch it: Behold the Bridegroom cometh, that great Seventh Seal mystery of the Coming of the Lord. He was coming for the Bride, for them that were ready. The marriage of the Lamb has come and His wife has made herself ready; if you heard the midnight cry, if you seen the Lord descending with a shout, if you are awakened to your day and your Message. He is always identified by His characteristics; He can change His form, but not His nature. 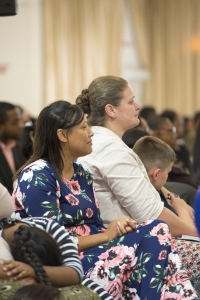 Then we know what He came for in His first Coming, to give them life abundantly, in the second Coming He cometh like a thief. Like Romeo to steel Juliette, to kill Jezebels children with death, and destroy those that destroy the earth.

We have thousand interpretations of the Message today, somebody has perverted the Word. The prophet says, men are under the control of devils.

The rich young ruler couldn’t obey the Word; he came to the right person, asked the right question, got the right answer, but made the wrong decisions. When he died, Jesus pulls the curtain and gives us a look, and shows us him in hell; he is in torment, and he is genuinely concerned about his family. He is trying to do something that he should have done on earth. When Lazarus died, angels carried him into the bosom of Abraham. Then he wants him to send somebody from the dead to his family and tells him, that they would repent. He is debating even now, calling him Father Abraham, the one Melchizedek came to, even though he was instructed in Truth. He had the opportunity in life, he came to the Presence, the fullness of the Word, Elohim, who became Jesus, and he didn’t recognize Him.

The bride is being formed in seven church ages, each age produced part of the mystery. When He came in the New Testament, He gathered all the Word in Himself. It was Him who cast the shadow, Adam was a figure of Him, Who was to come. 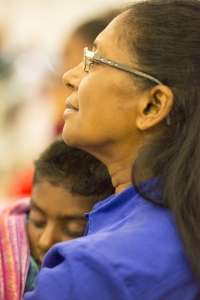 Boaz was born in Bethlehem; he had some land in Palestine, but our Boaz is the Owner of Heavens and earth. The bride will have to match that Word, not just theorize and discuss, but Christ has to be revealed to you personally. Jesus knew, He was the Word predestinated from before the foundation of the Word. That’s what the bride will be in the last days, a super race, a super church. She has the very same life, she fulfills the same Word in Bride form. She will step out and take the Word. 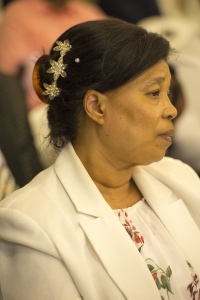 The first revelation given to fallen man was the revelation of the slain Lamb, that gives a man access to God. Abel was a shepherd, Isaac, Joseph, David, Amos, they all were shepherds. When Jesus came, He is the real Shepherd of the sheepfold. The  mystery of redemption is in shepherd and sheep. Humble herdsmen! You have to know the character of God, how He works. 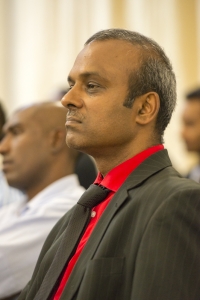 Brother Vin now dramatizes different parables: the woman with the bank drafts, the little boy with the stamp and the ice creme,  the old man and the violin, the eagle in the barnyard, the boy with amnesia, the slave, who was the king’s son. 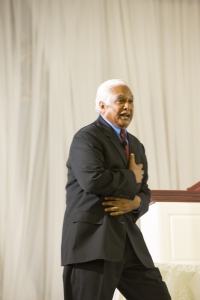 People think, Brother Branham tells stories; they’re not stories. It’s the Son of Man speaking parables, speaking a mystery. He is talking in a language; nobody without the new birth can get in that channel. The people didn’t know what they had in their hands, but when the Book is open, it’s the secret of the power in the life of the believers.

I trust you see in all these stories the mystery of the Seventh Seal.

We come from another world, a parallel universe. We are born in the earth to manifest and proof redemption, to be a Light in this age. These places here are predestinated in our lives in this day. The simplicity of what has come to us has broken the seals of our lives and introduces us to us. You are discovering that you are an attribute of God. You look and see and find the mystery in your life, find your name in the Book, like the little boy came to his aunties house and sees himself the first time in the mirror.

These simple “stories” quickened something to you. 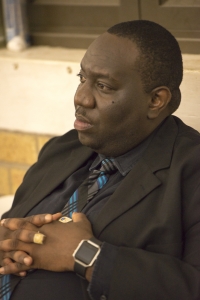 We feel that strange call, it’s eagle time. These earthly bodies are ready to be dissolved. The bride who has received this faith, they feel that pull, they feel perfection calling them to that place.

1. Corinthians 13:10-13
[10] But when that which is perfect is come, then that which is in part shall be done away. [11] When I was a child, I spake as a child, I understood as a child, I thought as a child: but when I became a man, I put away childish things. [12] For now we see through a glass, darkly; but then face to face: now I know in part; but then shall I know even as also I am known. [13] And now abideth faith, hope, charity, these three; but the greatest of these is charity.

All songs being sung today are pointing to the Eternal world… 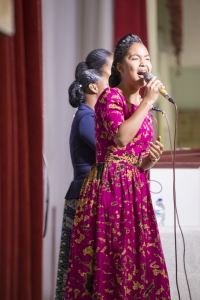 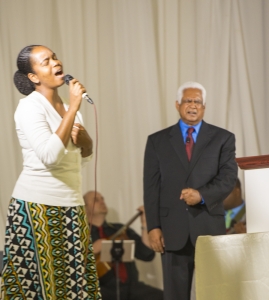 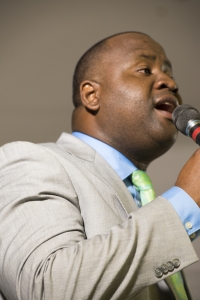