This is the last day of the great feast here at the Convention Centre. What a glorious time for the Bride! Today, 53 years ago the Cloud came with abundance of rain. And here we are in a place where the people are seemingly left to their own devices by the rest of the world, but God is zooming in today. This is the day of visitation, Haiti!

The singers from Trinidad and Haiti have practiced some songs together, and it’s just wonderful how the anointing flows into the congregation, especially when the believers hear the songs in Creole. 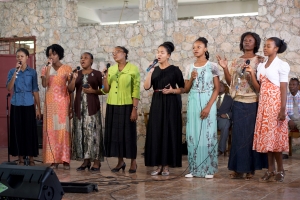 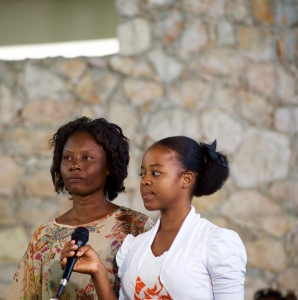 Words fail to describe the atmosphere; the saints here love to worship, and its genuine and spontaneous praise. 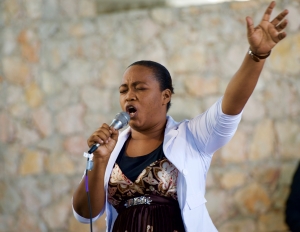 “The light of our day has come. Let there be light and God saw the light and saw that it was good. Why was the light good? Because it was separating the darkness, and quickened the seed and every tree is known by its identification.” 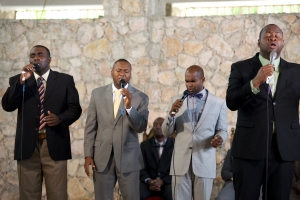 What a rich atmosphere, when Brother Vin is coming to the pulpit. 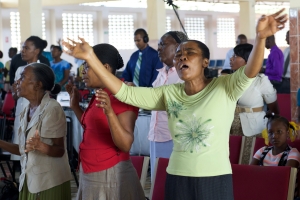 “Solomon saw the day was coming when the garden was to be restored. It was eaten down, but there was to be a restoration, the Tree of Life will bloom again, the House of God will live again. And we seen the second Adam has come down, the Lord from Heaven, a quickening Spirit, quickening every tree, bringing it up. You are the Lord’s planting by the spoken Word, the original seed. As satan has beguiled Eve so satan has beguiled the church and they ate from the tree of death. And God said, get back to your first love. When men fell, he tried to take the fruit from the Tree, the Word, but the four Cherubim guarded the Tree and man couldn’t take, because the Lamb would come one day and at the end of the age the Tree would come down with the fruit, with the Word, and we eat from the Tree in this hour and come into immortality. A message, a person, God Himself descended from Heaven. Eternal life is a Person. 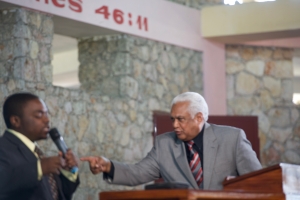 The title of today’s incredible service is:

It Was Not Good That The Last Adam Should Be Alone

and Brother Vin lays out the entire plan of redemption from Genesis to Revelation. How the first Adam was alone and God gave him an appropriate help, she was already in him unexpressed, like we were unexpressed in Christ. And God performed the first marriage in the Bible, the last marriage is the second Adam and the second Eve.

“The marriage of the Lamb has come and the Bride made herself ready. Behold the bridegroom cometh. Invisible Union, Uniting Time And Sign, Oneness. 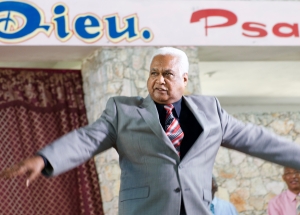 Why did God start with a marriage? He wanted to reveal a mystery to us.

God was unfolding His loneliness. He had everything in His kingdom, but He wanted a Bride. The Bible starts with a full man and a full woman being married;they didn’t have an earthly father or mother.

And when God married them; therefore shall a man leave father and mother and cleave to his wife. Father and mother is the strongest of blood ties. People love mama and papa, but there is greater love than that. Marriage is a mystery of Christ and the church. Christ and the Kingdom is the threefold mystery of the Seventh Seal. When we leave here, where do we go? To the marriage supper, to the honey moon, and after the millennium to the future home of the Heavenly Bridegroom and the Bride.  God came down and wooed you and showed His life and you were baptized in His name; He sent down the Seal, and put the wedding band of unmerited grace on you and united you to Him in holy union, and then you become one. This is God’s plan. And so God is unfolding this. The Bible is a Book of marriage. 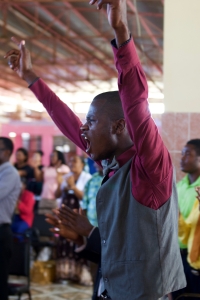 We come to the Throne by virtue of marriage. We are the Queen!

What kind of Bride is it? The woman is the glory of the man! 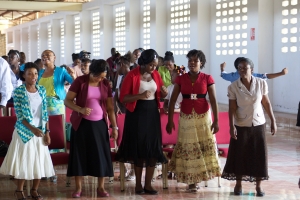 Are you part of the Bridegroom? Then there is no false seed in you!”

The service today concludes with lots of worship, some baptisms and several people surrendering their lives to God. 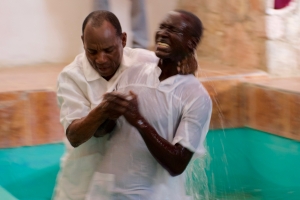 What a glorious day we live in to see our picture in the Open Book!

While the brothers dismantle the equipment, Brother Joel Conserve takes some of us to the back of the building, where they have a little library with photos from the time of construction of this Convention Centre and also a number of Message Books. After this lots of group photos are following. 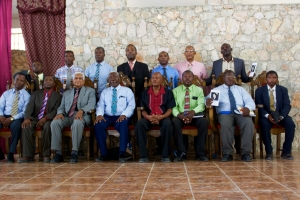 And yes, some relaxing time in and by the Mango Tree. 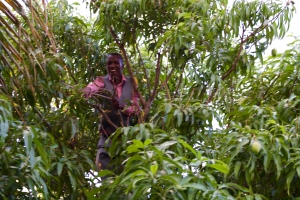 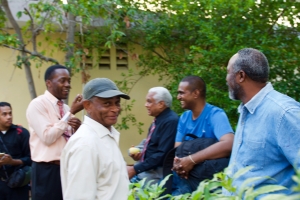