The alarm goes off merciless at 5:45 this morning and right away we are on the go to be ready for our pick-up at 7:30 a.m.  I need to mention here that 7 of us have to stay in a hotel because there was not enough space in the house, where the rest of the team resides for the time being. The drive from the hotel to the Convention Centre takes at least one hour.We now get a little bit more acquainted with Brother Ronnie, a deacon in Brother Conserve’s assembly, who is driving us faithfully back and forth day in and day out. The Lord will bless him for his great kindness.

It’s a hot day, the sun is already burning to parch the dry ground, and for millions of people it’s just a very common day. We are passing by smouldering piles of garbage, merchants in their little make-shift booths, trying to make a living by selling some fruits, some used clothes, just selling some little something to keep alive. We are passing by a massive army base, some white UN cars make their appearance in different areas. It’s quite a bumpy drive on those very poor dusty dirt roads. 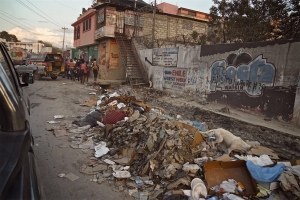 Seeing all of this makes me almost cry, looking at those little mothers trying to feed their babies with some little old reject baby food or whatever their hands can find.

But they who are elect will hear and recognize the call! God will not loose one of His. This is my only consolation in all of this.

I am thinking on what the prophet says in the Message

If you wanted to see Jesus, what type of Person would you look for? A real fine scholar? No. Ask somebody who knows what the original writing of the Bible was in–just plain, not even good grammar, just like you use out on the streets, Common people. See? That’s the type of Person you’d find. Where would you find Him at? The great high classes? Oh, no. Down on the river, among the poor, the outcast, whoever would receive Him.

When we arrive at the Convention Centre, we recognize the motto across the platform from Psalm 46:10:

Be still, and know that I am God

It gives me some comfort, because He knows all about it. His children here on the island are in the right place to be formed into His very image. Humanly speaking it’s difficult to swallow, but in God’s eyes everything is working for good for His elect. Other believers in different parts of the world have a different process, but it’s all for perfection. Every stone is placed different. It takes a lot of pressure to make a diamond. 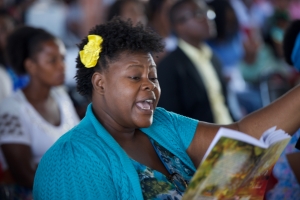 The service starts at 9:30 a.m. and it’s already such a wonderful atmosphere, as we sing in one mind and in one accord in French, Creole and English.

Here is a verse in English/Creole:

So we cry out Your name, El Shaddai, God of Grace

We rely on your grace, Adonai crowned in praise,

The anointed singers from Trinidad are creating such a lovely atmosphere, while they are starting out with the song “New things are being declared” which is very fitting for these meetings. Also the choir from Pastor Antonio Conserve’s church is presenting us with a  special in Creole.

Brother Vin is preaching and Brother Bernard from Miami is translating.

“This is our first time being in this country. The footsteps of a good man are ordered by the Lord. The Lord made a way for us to come to fulfill the desire of our hearts for a long time. But for everything under heaven is a time and season.” 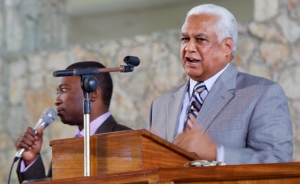 Brother Vin expresses his gratitude, and desires that the people see his motive and objective: to bring the people to the place where God has the preeminence and they can walk closer with God.


“We are commanded to discern a man that comes our way. Try every spirit, see what kind of spirit it is. Proof all things and hold fast to that is good. The brothers here can very well discern my motives and my desire to be a true Christian and then to be a minister, carrying this great message in action, reverence and humility, and they can see where my influence comes from.”

God requires respect for His Word. Brother Vin has come to this country and submits himself to the believer’s discernment. And he speaks about Isaiah who leaned on the arm of flesh, under the influence of an earthly king instead of the heavenly King, until God showed him a heavenly vision, and he cried,  “Woe is me, I am undone.”

He didn’t understand how important his calling as a minister was. And it shows, that every man, who has the fulness of the Word, God gives him a heavenly vision. Where there is no vision, the people perish. A vision causes a person to look deep in himself, and it produces confession. Isaiah realized he wasn’t carrying this true Word as he should have carried it. Without vision there is no confession. Look at our prophet, he had a great vision in the midst of Laodicea, when men became millionaires. Five times the prophet preached the message “Influence”, and he has put Isiah 6:1-8 in there, because there are men who become this Word. The Bride has the mind of Christ and we are all under one Headship, in action, with reverence and humility. Spiritual scientists working to see a Bride without spot or wrinkle, see them in step “Marching onward Christian soldiers.”

We walk in the Light and become the Light. What is Light? The Word manifested; the Light of this hour manifested.

The basis for cleansing is walking in the Light. God is known by His characteristics. Remember, God has been unveiled in these days, He is revealed in His own Word.

What is our role in the plan in this hour, fifty years after the going of the prophet? What happened the last 50 years? The apostles walked with Jesus three and half years and we know what they did. In our day the Holy Ghost has been loosed, but what is the present con 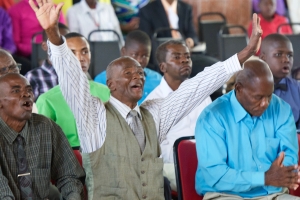 dition of the church fifty years after?

What is the reason that we take fifty years and cannot see anything? They had all things in common. Look what their praise and prayer did, the love and unity among them. That is why God could work with them. God needs sincere men to look at the Message again and come out of their own interpretations and look at the example God has given us. God keeps His promises,  and we need to put aside the things that are hindering the Holy Spirit, what He desires to do.

The Title of today’s service is

The Appearing Of Jehovah Shalom At Harvest Time

and the subject: The Dawning Of A New Day

with the Scripture reading from Judges 6:1-9.

“Judges 6 is a picture of a prophet blasting forth his message. In verses 1-7 the people fall away, verse 7 the prophet comes on the scene, and after that, when the people are oppressed and fearful at harvest time, the Angel of God appears.

We had the reincarnated ministry of Jesus Christ, and after the prophet went off the scene, the Angel of the Lord didn’t leave, He is here. 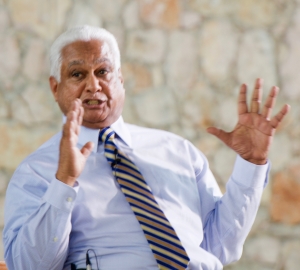 The problem today is that people walk in the humanistic realm. It takes a total surrender to God to see His miracles.

Look at the birth pains of this island in 2010, then last year the hurricane, the oncoming storm of judgment, then they brought in Cholera. Warning is coming before judgement. God doesn’t bring judgment before He is warning the people. But you have to recognize the channels. We need revelation. People have not been taught the Word properly and they don’t know what’s happening. The prophet came to uncover the enemy’s scheme. We have to see what’s happening when the Seventh Seal is open. But seven thunders are to wake the people up, it’s the opening of the Word. Seven thunders are the divine mystery truth revealed in the seven seals.

The devil comes in and is dividing up churches, dividing and conquer; its a Roman spirit. But when the devil has united his powers, God has sent an eagle anointing.

Satan is the god of this evil age that blinded the minds of the people. But we have received the evening light. In this hour the Angel of the Lord came down to leave the rich and find the oppressed ones. This is what’s happening here and now.”

The service has tremendeously blessed the believers and opened their eyes for what is happening 50 years after the prophet has left.

While the people are still fellowshipping after the service, and the singers practicing, I have the opportunity to talk to Brother Elie Joseph, who experienced the earthquake in 2010. You can find this little interview in a separate folder in the Haiti journal.

Meanwhile some of the sisters went to the house and prepared a wonderful dinner for all of us, and it got spiced up with some real good fellowship. 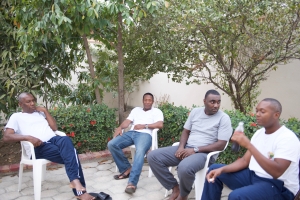 It is late at night, when seven of us drive back to the hotel and just about when we arrive at the hotel, Brother Timmy’s first son is born back home in Trinidad. What a special gift of God in conjunction with our visit here in Haiti! Brother Timmy has already four beautiful daughters, and his desire to have a man child also is fulfilled today, on the Sonday February 26,2017. More to follow!