Every morning of our life is a very good morning and by grace we are alive and well, knowing that our God has a plan and purpose for us to be here, no matter the circumstances. He has sent His angels to keep us in the way and to energize us for whatever task lays before us.

Yesterday’s rain transformed the unpaved roads into a mud slide and it’s very difficult to get up our roller coaster road this morning. 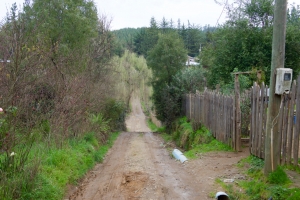 The driver gives it a couple of tries while the car is moaning and groaning, but we finally make it up the hill in one piece. Later in the day the sun starts to warm up the damp air, and the cold air is vanishing for at least a couple of hours.

Today, Pastor Pedro Peralta reached a milestone in his life. 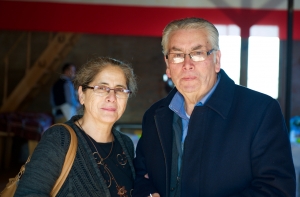 It’s his 70. Birthday and after breakfast Brother Elias, Brother Patricio and Brother Vin give a birth greeting, pointing to the faithful ministry of Brother Peralta; it’s a little celebration with some specials and delicious cake.

“God has set certain ministries in different parts of the world. Every true minister is part of the Body of Christ and God gives him helpers. God sends His Word and with this He sends His servants, and these men give their lives for it; sacrificial service without reservation, no resistance. Each one is cut out different, placed different; different stones, everyone has his own place. Some are fiery stones, some are soft stones. They who labour in Word and Doctrine are not worthy of honour, but worthy of double honour. They are ministering spirits, sent from the presence of God to minister to the heirs of salvation. They are willing to pay the price for the Master’s service. Brother Peralta is a true man of God, a gift of God; God always gives Himself, nothing less. God so loved, that He gave… And God always wants to give His very best, so He gives Himself, God’s wrapped gifts in flesh. The soul on the inside is worth millions of worlds and He wraps it into flesh and gives this as a gift to His Bride in this age. To God be the glory for a true servant of Almighty God.”

On behalf of the Third Exodus Assembly Brother Peralta receives a new cell phone, which we were told he resisted for years, still hanging on to his really outdated version, but today is the day of his advancement! 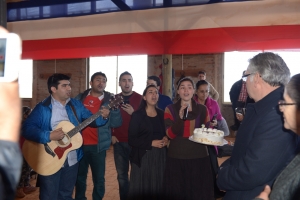 After breakfast the ministers gather for a minister’s meeting, and the rest of us take a bus drive to the ocean side of Constitucion, where the destructive 8.8 earthquake and tsunami hit in 2010. Witnesses tell us, that the very epicentre of the 8.8 earthquake was in Cobquecura, about 100 km away, and that there was no tsunami warning at all. It all happened at 3 a.m. while everybody was sleeping. Three waves, one after the other – each reaching to about 12 m high – merciless licked up homes, walls, rocks, trees, everything in their way. We are passing by several buildings, which are still not restored.

It was an unthinkable disaster and just walking around in this very area here is a strange feeling. The water of the Maule River, which is flowing into the Pacific Ocean, was completely sucked out by the ocean and then suddenly was rising so high, that it took the entire island of Orrego under, where more than 400 people were killed.

I’ve asked Sister Irene Peralta, if they felt the earthquake in Santiago, which is about 300 km from the epicentre, and she told me, when they woke up that night the shaking was so strong, that they couldn’t even get out of bed. It was a horrible indescribable experience. (This Chile journal has a separate page with a first-hand testimony from our Brother Opazo.)

We also have the opportunity to pass by the former church building, which will soon be transformed to a stay for visiting believers. We even walk inside, look at the old grand piano which is completely taken apart and has no more keys to play. There is certainly a big difference to the new building. 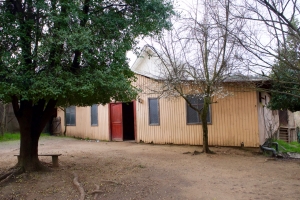 In tonight’s service Brother Vin is preaching Creation Was For Redemption, and not redemption was for creation, and he emphases, that if we can see this, it will move our thinking to another level. Brother Vin reads from John 1 and also from 1. John 1, and here is just a very little excerpt:

“Creation comes after God had revealed His purpose. The Lamb of God was slain before the foundation of the world, before there was a creation. There was nothing created yet. That’s the original picture. The only thing that’s mentioned in the Bible about before the foundation of the world is that the Lamb was slain and the names of those who were considered in redemption were put in the Lamb’s Book of Life.

God saw everyone of us and for every age there was a Word allotted, and a portion of the names that were in the back part of His mind, that were considered in redemption. He knows everyone who is going to come in his respective age. We have no choice if we want to be short or tall, male or female, what race, which age we are born in. God in His sovereign will made every vessel for every purpose and He knows what kind of service would to be done by each one. “You have not chosen Me, but I have chosen you.”

“It’s not who loves Me, but who I love.” Everyone has a place. This all was when He was Elohim. His works were finished before the foundation of the world. He saw you and me in glorification when we were just a thought, an attribute in His mind. “It’s not by might or by power, but by My spirit.” He knows exactly where we are sitting tonight.

You want to be led by the Spirit to receive God’s promise for this hour. Look what you are caught up into! You must prophesy again. We are in union with the Head to finish the commission. 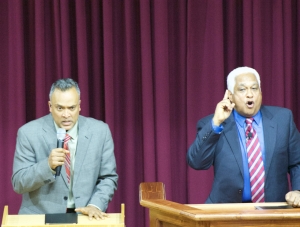 God couldn’t be perfect as Elohim or Melchizedek. From the very beginning God saw Himself coming in Jesus. That’s why the Lamb was slain. He couldn’t die as Elohim, He couldn’t die as Melchizedek, but He had to come in human flesh. Nobody could spit on Elohim, and as Melchizedek He couldn’t be poor and had no place to lay His Head. He never experienced pain as Elohim. In Jesus He had to go through all of this. The angels worship God as creator, but cannot worship Him as redeemer, because redemption is a greater work than creation. That’s why the redeemed have His name. They are sons and daughters and share His throne, His dominion, not angels; they are servants. He cannot deny us, if we come from His loins. God is not complete without us.”

What a tremendous picture Brother Vin has painted for us tonight!