All our thoughts are around this powerful Word that we are hearing and even this morning we fellowship with our host family, Brother Fidencio Espinoza and Sister Paulina Sanchez about the grace of God in our lives. 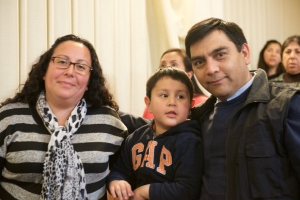 We have such a blessed time to stay in this home, where we can feel the love of God. The saints have so little and give so much with all their hearts.

The service tonight starts already at 5 p.m. and everybody is in great expectation to hear the continuation of yesterday’s service. 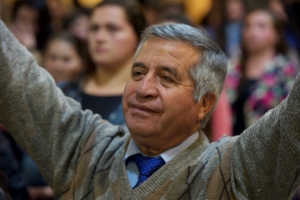 The sincere worship of the saints is creating such a wonderful atmosphere for the Holy Spirit. 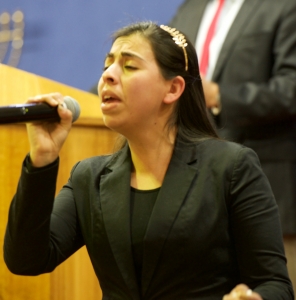 Brother Peralta speaks about creating the right atmosphere and points us to Romans 8:16:

The Spirit itself beareth witness with our spirit, that we are the children of God.

When Jesus sat down with His disciples the last time, they didn’t know, that it was the last time, and He told them, Do these things in remembrance of Me. He has invited us to this fellowship. And today we can see Him in one another.

Brother Vin – Brother Michael Jennings is interpreting tonight again – is coming to the pulpit, and he reminds us, that when we feel the Holy Spirit like we do in these meetings, we need to reach out and bring our petitions. 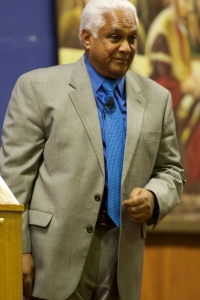 “The Angel of God is present to heal, to deliver; reach out and claim what you have need of. He is faithful who promised.The captain of the Lord came down to unite with His elected people.”

Brother Vin is giving us a deeper look into Rahab’s experience tonight, an up-dated version for our day, so that we cannot miss to see ourselves in the Scripture. The title of the service is the same as yesterday:

Rahab, A Mystery Of The Gentile Bride In The Ephesians – Part 2.

(the writing in bold are Brother Vin’s comments)

[1] And Joshua the son of Nun sent out of Shittim two men to spy secretly, saying, Go view the land, even Jericho. And they went, and came into an harlot’s house, named Rahab, and lodged there. They went under divine guidance, they went directly to a redeemable attribute of God.  [2] And it was told the king of Jericho, saying, Behold, there came men in hither to night of the children of Israel to search out the country. They had heard the news about the opening of the Red Sea. The people were terrified to hear about these things. Judgement had fallen on Egypt, the Amorites were left in great defeat, and every time they came to a nation, fear and panic came. And in Jericho they realized they were next in line and they began to prepare for the invasion. They had an intelligence they had reported to them, that spies had come into this city. The military was set in place from where to dodge the invasion.

[3] And the king of Jericho sent unto Rahab, saying, Bring forth the men that are come to thee, which are entered into thine house: for they be come to search out all the country. You have to catch the atmosphere here, the condition of the time, when they were under invasion. They had road blocks and controls everywhere. It was a tense situation.  [4] And the woman took the two men, and hid them, and said thus, There came men unto me, but I wist not whence they were : the first time she ever met these men, and all the people were ordered to  report when they see these men. The surveillance system was so good, they knew where they went. [5] And it came to pass about the time of shutting of the gate, when it was dark, that the men went out: whither the men went I wot not: pursue after them quickly; for ye shall overtake them. Something was happening to this woman; she is giving support to two strangers and the city had warned that these people had brought destruction wherever they went, and that they wanted to take that country. And they were threatened to be executed if they were found with “these terrorists.” But she recognized that these men had a living God. She decided, this cannot be false, it has to be the truth. She was taking sides with these men.

[6] But she had brought them up to the roof of the house, and hid them with the stalks of flax, which she had laid in order upon the roof.  [7] And the men pursued after them the way to Jordan unto the fords: and as soon as they which pursued after them were gone out, they shut the gate. They locked down the whole city. [8] And before they were laid down, she came up unto them upon the roof; [9] And she said unto the men, I know that the Lord hath given you the land, she had a knowing, although they didn’t come as soldiers with weapons and that your terror is fallen upon us, and that all the inhabitants of the land faint because of you. They were the Exodus people then, and we are the exodus people in this hour. [10] For we have heard how the Lord dried up the water of the Red sea for you – 40 years after that, that news had spread. Look at us here in  2016; we’ve heard about 1909, 1933, 1946, about 1963, we haven’t been there, but we believe it. These were people in the days after the exodus prophet, just like us today – when ye came out of Egypt; and what ye did unto the two kings of the Amorites, that were on the other side Jordan, Sihon and Og, whom ye utterly destroyed. [11] And as soon as we had heard these things, our hearts did melt, neither did there remain any more courage in any man, because of you: for the Lord your God, he is God in heaven above, and in earth beneath. She had the testimony; she was the woman at the well in the Old Testament, she could recognize the Word, she had representation. She had faith.

[12] Now therefore, I pray you, swear unto me by the Lord , since I have shewed you kindness, that ye will also shew kindness unto my father’s house, and give me a true token: When she had faith in a scarlet cord, how much more we today, who have the True Token. We are the greater Rahab in the greater Ephesians.  [13] And that ye will save alive my father, and my mother, and my brethren, and my sisters, and all that they have, and deliver our lives from death. Salmon, whose name isn’t even mentioned here, was thinking, that he never had found such faith in Israel. [14] And the men answered her, Our life for yours, if ye utter not this our business. And it shall be, when the Lord hath given us the land, that we will deal kindly and truly with thee. Those men promised it to her, although Joshua was not even there, but they knew who had sent them. And she believed on those who God had sent. [15] Then she let them down by a cord what about the Blood of Jesus Christ, the only and real Token through the window: for her house was upon the town wall, and she dwelt upon the wall. The target was the world.

[16] And she said unto them, Get you to the mountain, lest the pursuers meet you; and hide yourselves there three days, until the pursuers be returned: and afterward may ye go your way. She talked like a general to them, gave them instructions [17] And the men said unto her, We will be blameless of this thine oath which thou hast made us swear. [18] Behold, when we come into the land, thou shalt bind this line of scarlet thread in the window not on the floor which thou didst let us down by: and thou shalt bring thy father, and thy mother, and thy brethren, and all thy father’s household, home unto thee. All that you desire to be saved [19] And it shall be, that whosoever shall go out of the doors of thy house into the street, his blood shall be upon his head, and we will be guiltless: and whosoever shall be with thee in the house, his blood shall be on our head, if any hand be upon him. [20] And if thou utter this our business, then we will be quit of thine oath which thou hast made us to swear. [21] And she said, According unto your words, so be it. She had discernment of Spirit And she sent them away, and they departed: and she bound the scarlet line in the window. 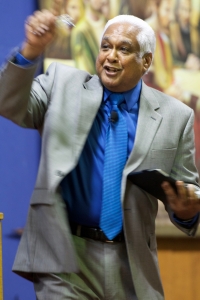 What is so mysterious about this woman? This is the day of full restoration, one God, one faith, God is interested in giving every member of His Body a portion; you are not serving God for nothing. This church has received the fullness of the Word and our faith has literally be turned back to the faith of the fathers. This is the restoration of the Bride tree. His life in you brings forth the fruit. The branch is energized by the life. Joshua is considered the Book of Redemption of the Old Testament. 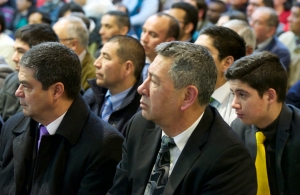 The elect is the Bride tree restored, she has the wisdom, discernment, faith, gifts of healing, she is restored. She is called the Super Church because the Super Christ is in her, oneness. What a privileged people we are.

Jericho was a very evil city; Santiago is on record for the most powerful earthquakes, and active volcanos.

When you know the Word under the sixth Seal, those elements are here. By that this city has caught the world’s attention. Do you think you have all this in the natural and not foreordained men, a five-fold ministry, here? 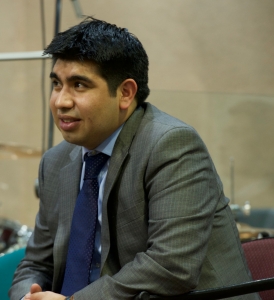 They are going to lead a redeemed people. These men are ministering spirits to minister to the heirs of salvation. Stay with your pastor; he is ordained to lead you through. The pastor is the angel of God to the church. The Angel of God opened his eyes to see the angel of the age, and he is raising the seeds, that God has put under him. These spiritual Joshuas are taking the churches into their land. 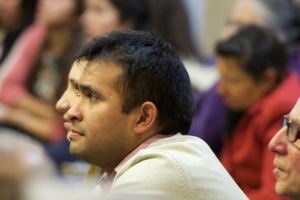 Rahab is a secret. It was at harvest time, at the end of the age, the hour when the elected called out people have been brought to a position – after the prophet went off the scene. Then God takes men to bring these people into that land of which the prophet spoke of. In that land the prophet had full authority, the spoken Word. Joshua didn’t stop there. He called the elders; this is not a one-man show, put your foot on the neck of the enemies. 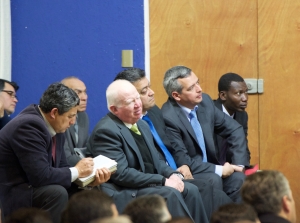 When we look and see what is come to us, they found a gentile woman and this woman by faith received the men. She already had faith in the living God and when she heard, she believed. We heard what happened in Bombay/India, in Mexico, in Durban/South Africa, what happened in the woods when the Spirit was creating. She didn’t meet the prophet, but received anointed and commissioned men. And this is the same pattern today. Bro. Branham has finished his course, but the angel of the church is preaching to you. You have to recognize who is among you. How shall we know the works of God? Believe on him that God has sent!

Rahab is a mystery, but you are a mystery in this Ephesians, at the end of the age.”